The «Penfield» diagram of reflexion 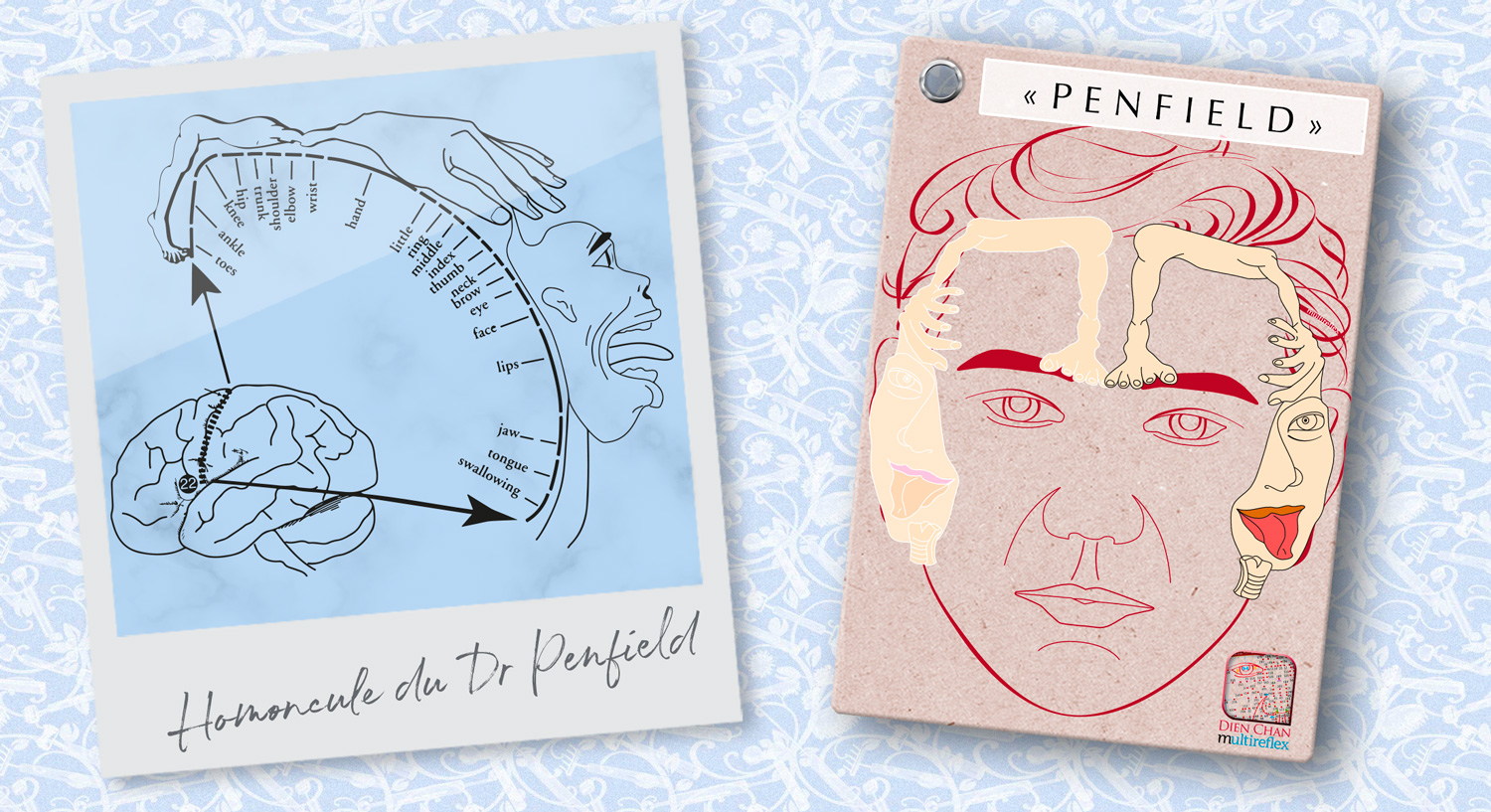 This is in fact the first diagram of Dien Chan. While Professor Bùi Quôc Châu had established his map of specific points, he was interested in the work of Dr Nogier who introduced a pattern of reflection lodged in the ear.
At first, he even thought that his bqc·point 0· belonged to auriculotherapy.

But why is this called the “Penfield”?

Those which refer to a story bear the name of the artist or the scientist: “Rodin” for the diagram which recalls the position of the famous sculpture of the “Thinker of Rodin”.

But it was by consulting a scientific journal that referred to Dr Wilder Penfield’s (1891-1976) research into the brain that Professor Châu had enlightenment.
Dr Penfield’s diagram of the homunculus represents regions of the human body corresponding to specific stimuli from the cerebral cortex.

Professor Châu observed this diagram while mentally projecting it on his Dien Chan point map.
He remembered that in geometry we define a surface with at least three points. And the first 3 bqc·points came to his mind; they were 34· 16· and 14·.

Positioning Dr Penfield’s homunculus on the face, bqc·point 34· coincides with the foot of the diagram, bqc·point 16· with the eye and 14· with the throat.

Let us remember that at that time Professor Bùi Quôc Châu only had his map and detailed records of the effects and indications for each bqc·point discovered.
He perfectly remembered having used bqc·point 34· to treat numerous pains in the feet, bqc·point 16· for vision problems and obviously all ENT diseases treated with bqc·point 14· and reflex zone around the earlobe.
It matched so well that he went back to his notes to check if other points on the map confirmed the coincidence.

Yes, yes, yes! Incredible, bqc·points such as 197· were already being used for knee disorders. Pr Bùi Quôc Châu was already successfully working the surface of the top of the forehead and which is now described by the hip in Penfield’s diagram. And so on…

This first pattern of reflection therefore opened the immense door to multireflexology.
He thus understood that he could join —following the anatomical coherence— the points of his map in constellations to describe diagrams of reflection.

It was when he saw the full-body outline on his face that he was able to draw the “Red man” sometimes referred to as Mr Yang. He completed it with the diagram of the “Blue Lady” or also called “Madame Yin”.

This board actually embodies two combined diagrams and became his logo illustrating not only two representations of the body, but also the two forces in equilibrium.

The story of the discovery is important

It allows us to better understand the method, which is why we explain it in our educations. This makes it easier to study each diagram, to understand them well in order to know how to project them correctly on any face.
The goal of the experts in Dien Chan is to help every practitioner to become a care designer. This means that taking each curriculum module, you learn to personalise each treatment to the patient.

Let us not limit ourselves to the nomenclature of the pathology which is borrowed from Western medicine, but rather learn to “translate” into therapeutic gestures the narration of the disorder offered to us by the person treated.

Both Dien Chan and Chan❜beauté are very effective if we follow a holistic care plan.

That is, we must be aware of:

2 Comments on “The «Penfield» diagram of reflexion”

• Do you want to take charge of your health?

• Are you a pro and want to push the boundaries of your treatment room?

We can help you!

Dien Chan is the natural method of care and well-being that will change your daily life.

By discovering an extremely effective and rapid non-invasive therapeutic gesture.

Your customers and your entire body will love it!

The team of Dien Chan experts offers you the opportunity to discover the original method of facial reflexology and to perfect your practice.